Wowzers! October had me jumping like a June bug on a hot frying pan. Sorry to leave you folks hanging. I had several more interviews to post, and was sure I'd get around to it on my loverly lengthily vacationy, but alas the whole week slipped away and here we are.

So, back into the fray with another interview of a man I can't help but admire. Smart, clever, handsome, wordy, all around bad ass Richard Godwin is a writer of noir, crime, and horror. Oh and he's a playwright to boot. (Black satires! Who knew!) His first crime novel ‘Apostle Rising’ was released on March 10, 2011 and is available online and on the shelves of all good bookstores. I had the chance to pin him down and ask him a few short questions to which he gave us a few short answers. British spelling included at no charge. 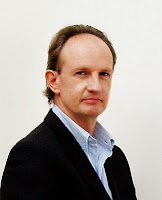 What is your favorite genre to read and why? What's your least?

I don't have one. I read almost every genre conceivable because literature and storytelling are organic.

Ever notice that cherry flavoured things don't usually taste like cherry? Red just tastes ... red. In that sense, what is your preferred food color? (example: I like yellow when it's supposed to be banana, but not lemon.)

I eat cherries, real cherries. Artificial tastes and colours are annoying. I don't think I have a favourite food colour. To me it is about how all the colours merge on the plate.

If you could talk to one animal type on the planet, which would it be and why?

I wouldn't because I couldn't. Dr Doolittle was tripping out.

Who do you consider to be the most influential writer of the last twenty years?

Cormac McCarthy. He took America back to the frontier and tipped it on its head.

What moves you to create?

The desire to explore the human condition.

If you knew you had exactly one year left alive, would you spend it any differently than you do now?

I would still write. I would also spend more on fine wines.

If you had to eliminate either Orwell's 1984 or Bradbury's Fahrenheit 451, which would you get rid of? (eliminate as in they were never written)

I wouldn't I never take either or choices Aristotle started that and he is responsible for major pathologies, hey buy a car but it has to be a Ford or a Vauxhall. I would let them copulate and become one thus creating a new prophetic model.

What is your favourite/scariest monster?

Richard Godwin is the author of bestselling crime novel Apostle Rising, in which a serial killer is crucifying politicians
http://www.richardgodwin.net/
http://www.blackjackalbooks.com/order
He is a widely published crime and horror writer, and his next novel will be published early next year.
*********
Thanks again for letting me pick your brain, Richard. And yes I went this whole interview without referring to him as Dick. Except for just then. I think I did rather well!
Later taters,
Tonia
Newer Post Older Post Home